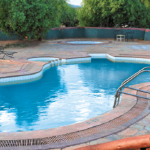 Tsavo East National Park is one of the oldest and largest parks in Kenya covering 13,747 km². Opened in April 1948, it is located near the village of Voi in the Taita District of Coast Province. The Nairobi - Mombasa highway and the Standard Gauge Railway (SGR) divide Tsavo East from Tsavo West. Several small rivers including the main river Tsavo / Galana river cross the park and flow into the Indian ocean. Visit the nearby swamp area with often a high concentration of animals, the ancient granite rock Mutanda and the Lugard Falls in the North. The park is home to lions, leopards, cheetahs, elephants, zebras, buffaloes, lesser kudus, Grant gazelles, gerenuks and around 500 bird species among others. While on game drive you might come across 'red elephants'. The red laterit soil they bath and dust themselves in colours them brick red.

Sentrim Tsavo East is located in Tsavo East National Park. The waterhole in front of the camp is visited by elephants, buffaloes and other game. So you can sit, have a drink and watch comfortably. The camp has the atmosphere of the pioneer camps of long ago while providing the luxury of a permanent camp with modern amenities. Access The Camp is 345 kilometers from Nairobi, 11km from Voi Gate, 40 kilometers from the Buchuma Gate and approximately 2 hours drive from Mombasa. Malindi is a mere 167 kilometers through the park.

Generally warm 22° C - 34°C with a low humidity especially outside the rainy season which is mainly April to June. The evenings and early mornings can be cool especially when it is windy, so a jersey or light anorak is necessary.